Sydney Children’s Hospitals Network (SCHN) in partnership with HealthShare NSW is developing a standardised service delivery model for the safe, timely and efficient transport of newborn babies to appointments and back, and to local hospitals.

View a poster from the Centre for Healthcare Redesign graduation, May 2018. 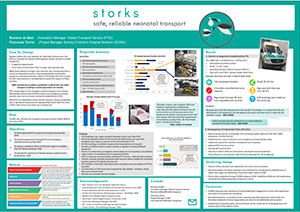 To reduce client complaints and patient incidents related to the transfer of newborn babies from specialist services to local services in the Greater Metropolitan Sydney Area, by 50 per cent by July 2018.

Newborn babies who are inpatients at a NICU or SCN often require transfer to a hospital closer to home when they no longer need specialist care. In some cases, a transfer from the NICU or SCN to another facility for diagnostic appointments is also required. During these transfers, the baby either travels in a humidicrib or capsule. While these patients no longer need intensive care, transporting them remains a niche and specialised service, requiring appropriate coordination, equipment and trained clinicians.

Prior to the project, there was no clear pathway for the safe, timely and efficient transfer of newborn babies in the Greater Metropolitan Sydney Area. The Newborn and Paediatric Emergency Transport Service (NETS) ran a Return Transport Service trial for a period of 27 months from January 2013 to April 2015. During this time, a service was provided for NICUs returning inpatients to local SCNs. However, it was not considered financially viable as a long-term solution. During this time, more than 10 pieces of equipment including incubators were purchased locally by local health districts to transfer SCN inpatients to specialist appointments.

The introduction of the Ambulance Reform Plan 2012 established the HealthShare NSW Patient Transport Service (PTS). Non-emergency newborn transfers were not a consideration or included in the Ambulance Reform Plan. PTS began operations in May 2014. At the conclusion of the NETS trial in April 2015, no succession plan was put in place and the transfer of these patients sat with PTS as they were classified as non-emergency transfers. As such, one vehicle in the PTS fleet was retrofitted to carry out these transfers. The demand of these transfers across the Greater Metropolitan Sydney Area outweighed the capacity available. As PTS did not have a workforce to accommodate these patients, a NICU nurse was required to accompany babies on every transfer, increasing the costs associated with each transfer and reducing the efficiency of NICUs.

While PTS continued to respond to transfer requests, the clinical complexities of newborn transfers, lack of specialised equipment in the PTS fleet and appropriately trained staff meant the needs and expectations of parents, carers and NICU staff were not met. Between 2015 and 2017, there were 4415 booked transfers and only 2812 of these transfers were completed. An audit of transfers conducted in 2016 found that 54 (1.3 per cent of all bookings) resulted in Incident Information Management System (IIMS) notifications and complaints, not including those not entered into the system.

Between 2015 and 2017, PTS completed 2812 humidicrib transfers, including transferring babies to and from appointments, as well as to local hospitals following specialist care. That year, 210 humidicrib transfers were cancelled, with equipment failure or offline equipment one of the primary reasons for the cancellation. It was determined that identifying a standardised service delivery model for the Greater Metropolitan Sydney Area would provide safe, timely, efficient and cost-effective transfers for newborn babies.

The following steps were undertaken to manage resistance throughout the project.

Pre-implementation – Planning for the project is well underway. Clinician and consumer consultation has occurred but no solutions have been developed.

As of March 2018, the project has established strong relationships, trust and credibility. A full evaluation of the Baby Bus will be undertaken in 2018, measuring patient numbers, staff hours and overtime, number of pick-ups and drop-offs, and project costs. Preliminary data from one facility showed the Baby Bus was successful in reducing staff overtime by 50 per cent, and the timeliness of transport had improved. The following outcomes will be considered in the final evaluation:

PTS and SCHN will work with the Ministry of Health to deliver and implement a NSW Health policy framework for this project and provide an options analysis for future service direction. The evaluation of Baby Bus in combination with adherence to statewide policy will inform future implementation.