Westmead Hospital developed and implemented a series of policies, protocols and guidelines to better manage referrals from health professionals and improve waiting times in its ophthalmology outpatient clinics.

View a poster from the Centre for Healthcare Redesign graduation, August 2017. 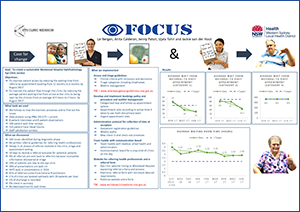 The Westmead Hospital ophthalmology service is located in Western Sydney Local Health District (WSLHD), which is projected to be the state’s most populous local health district by 2021. WSLHD features several pockets of extreme socio-economic disadvantage, as well as high rates of diabetes. The population growth and increasing complexity of medical conditions in WSLHD has increased the demand for ophthalmology services in recent years.

As a designated NSW Health Eye Specialty Centre, Westmead Hospital offers a comprehensive range of specialised eye services. However, an audit conducted in September 2016 found that some people were waiting more than 12 months for an appointment. There were no documented criteria for triaging referrals, or systems that allowed staff to manage waiting lists. Staff reported anecdotally that long waiting times were resulting in people presenting to the emergency department (ED), particularly if their condition was worsening. As a result, 28 per cent of outpatient appointments in September 2016 were ‘walk-ins’ from the ED.

Experience in managing outpatient clinics led staff to believe that the longer a person waits for an appointment and the larger the gap between the appointment notification and the appointment date, the higher the did not attend (DNA) rate. Prior to the project, some people were being notified of their appointment 12 months in advance and in September 2016, the DNA rate was 24 per cent.

A patient survey conducted in September 2016 found that waiting times in the clinic were also an issue. Sixty per cent of patients reported waiting longer than two hours to see a doctor, with some reporting a six-hour wait. As a result, there were a number of complaints at a local and state level regarding waiting times for an appointment and within the clinic. It was determined that reducing these waiting times would increase access to the clinic, improve patient flow and provide a better care experience.

Planning is key at every step of the redesign process. It is important to understand the problem before solutions are created, and engage staff and patients so they can support you through the process.