Increasing the Appropriateness of Dietetic Referrals

To ensure that 100 per cent of malnourished patients in the Medical Ward of South East Regional Hospital (SERH) are appropriately referred to the Dietetics Department using the MST, within six months.

Since relocating to SERH in March 2016 and transitioning to electronic medical records (eMR) in July 2016, the Dietetics Department at SNSWLHD had increased demand for its inpatient and outpatient services. Occasions of service increased from 214 to 433 per month in the following 12 months, despite dietitian staffing levels remaining constant. This increase was largely due to the introduction of the MST in eMR, which measures patients’ risk of malnutrition on admission and at various stages of their hospital stay. Nursing staff use the MST to assess weight and appetite loss, then give the patient a score between zero and five, depending on their nutrition risk. If the patient receives a score of less than or equal to two at any time, the eMR generates an automatic referral to a dietitian.

Timely nutrition screening is vital for identifying patients who have a high risk of malnutrition and gives dietitians an opportunity to treat the patient in a timely manner. Prior to the project, nursing staff identified a number of barriers impacting their ability to complete the MST with every patient. These included inadequate staffing, an inability to obtain patient data, poor knowledge of MST, a perception that nutrition was less important than other nursing duties, and difficulty with using the form. This led to variances in MST scores between staff, inappropriate referrals to dietitians and additional strain on the already stretched resources in the Dietetics Department. As a result, there were missed opportunities for early intervention and many patients who required a consultation with a dietitian were not being seen.

The following solutions are currently in development and will be implemented in 2017. 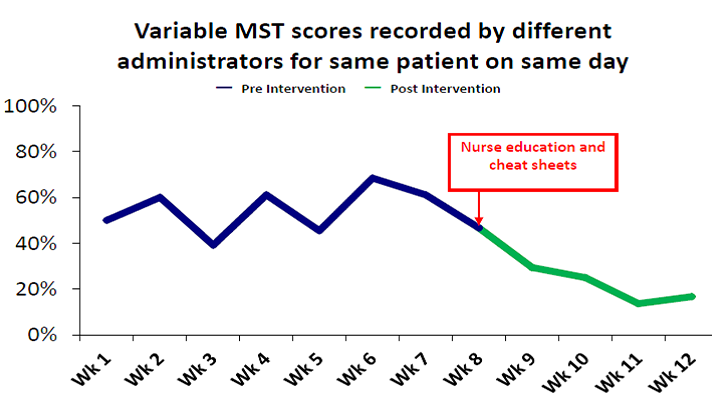 Strong communication and adequate staffing levels are critical to the success of the project. Staff shortages caused delays to the implementation of this project, as well as the development of some solutions. To address this, the timeline of the project was extended and the final evaluation postponed until the current solutions could be implemented over a six-month time frame.