This project involved six mental health services working together to improve communication and referral pathways, so that young people receive the care they need as quickly and efficiently as possible.

View a poster from the Centre for Healthcare Redesign graduation, December 2016. 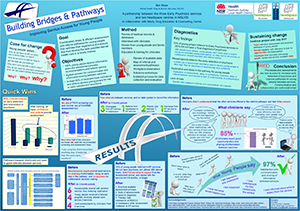 In 2015, 15% of referrals to early psychosis services in Northern Sydney Local Health District (NSLHD) did not have a clear diagnosis. These young people used 865 clinical hours, which stretched resources and reduced the capacity of clinical teams to provide services to young people experiencing psychosis. In addition, there was no identified suite of assessments or information for young people on what to expect during the extended assessment period.

A review of referrals to early psychosis services in NSLHD found there were many missed opportunities for the early detection and referral of psychosis from headspace centres, which are Commonwealth funded ‘one stop shops’ for young people, where they can access a range of mental health and other services. These missed opportunities seemed to be due to a lack of familiarity with and confidence in using the Comprehensive Assessment of At-Risk Mental States (CAARMS) tool used to detect early symptoms of psychosis. There was also a lack of agreed processes for referrals, which may have had an impact on referral rates. As early interventions result in improved recovery and outcomes for young people, early detection and treatment are critical.

Prior to the project, there were no formal processes for collaboration between headspace, NSLHD and community mental health services. Each used their own medical records and databases. The lack of communication and knowledge sharing between services resulted in duplication of assessments and significant delays for young people. These delays were partly driven by a lack of understanding of referral processes and services provided. Duplications and delays had a negative impact on young people and wasted the valuable time of mental health clinicians.

Sustained - The project has been implemented and is sustained in standard business.

A significant challenge with this project was the lack of available data. While it was possible to map the pathways of individual young people and identify the delays and duplication, existing records did not capture specific referral numbers between services, or how often specific screening and assessment tools were used. This is something the project team will aim to address in 2017.